skip to main | skip to sidebar

Forgot to mention that we saw 77 bikes yesterday and traveled 251 miles. Today we saw 109 bikes. That’s probably because we were on one of the most sought after roads in America, the Lolo Pass (Hwy 12) in Idaho.

We awoke around 7:30 to clear skies and temps in the low 60’s. The hotel had a nice little continental’ish breakfast. Scramble eggs, sausage, imitation bagels… We are used to “real” bagels. Next time we’ll stick with the toast. All in all it was pretty good for “free”.

The Best Western in Orofino is simply awesome. Check out the photos. The hotel is right on the Clearwater River. The snow is melting and there have been several inches of rain so the water is high. Every few minutes we saw large logs and other debris floating by at quite a clip.
View from our room: 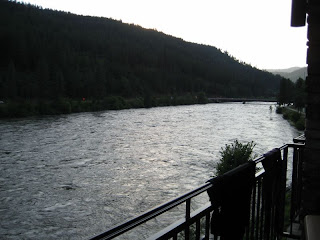 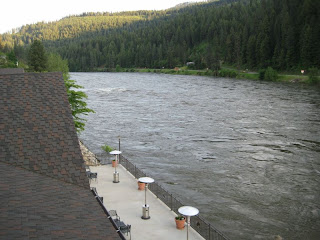 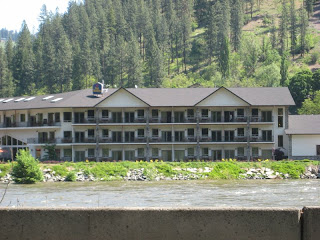 We departed at 11:00 and it was already 77 degrees. We hit Hwy 12 (East) and the scenery and weather was glorious. There were a ton of whitewater rafters on the Lochsa River. We stopped at Lochsa Falls and shot some photos and a video. There was a professional photographer there too. Check out some of these photos: http://tinyurl.com/ouo787.
Class IV rapids: Lochsa Falls 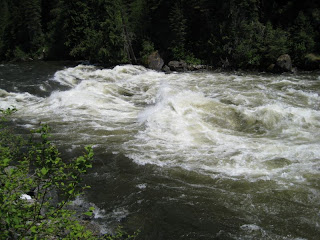 We stopped for lunch in Missoula, MT. and as we looked South the skies were not looking good so we put on the rain gear to ward off the precipitation. It almost worked.

Near Huggy Bear Ln. just North of Victor, MT we had a nice chat with a Deputy Sheriff. The speed limits in Montana can be confusing. Brian honestly thought that the speed limit was 70 so we were doing 75. We came upon a white Suburban and from about 100 yards away recognized the “SHERIFF DIAL 911” sticker on the tailgate so slowed to 70… that speed brought us even closer so, like a good driver, he pulled to off to let us by… or not.

Once pulled over he turned on the overheads. We stopped. As he approached we already had our helmets off and were getting off the bikes. He asked us to remain on the bikes with the kickstands up. Hmm… that seemed like a pretty safe way to approach biker scum. It would be hard to assume an offensive position as a rider in that position.

The nice deputy said “the reason I stopped you was because I was doing the speed limit of 65 and you two came upon me pretty quick”. Brian said “I thought that the limit was 70”. He took our licenses, ran us, then came back to visit. He said “your paperwork came back clean… I just stopped you to tell you that the speed limit here is 65… sorry that I had to stop you”. Then he asked “Where are from?” and realized that he already knew. He just wanted to know a little about our trip. He must have said “I’m sorry I had to stop you” at least three times.

Anyway, as we approached the 7,264 foot summit of the Bitteroot Mountains (Chief Joseph Pass) it began to rain. Not much, just a “shower”. 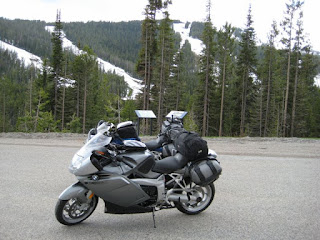 The ride down the other side turned dry pretty quickly and we coasted into Salmon around 6:00 (or 7:00 as they say in this time zone). We fueled the bikes, grabbed a bottle of Idaho wine and were in our room at the Syringa Lodge by 6:30.
Here is a view from our room: 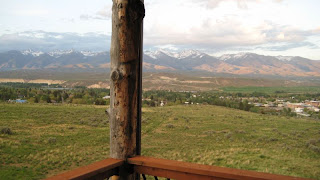 Tomorrow it’s off to Twin Falls, ID. The weather guessers are promising lots of sunshine.

Who the heck are these people?